Women received more primetime broadcast television coverage than men for the first time in a Winter Olympiad, dating back to 1994 when the studies began. This event is particularly noteworthy as the gender gap has generally been wider – sometimes more than 20% – in the Winter Games than the Summer Games.

When mixed pair events are excluded, women received 52.2% of the coverage compared to 47.8% for men.

The proportion of primetime coverage, when mixed pair events are excluded, is also the third highest ever for women in any Olympiad studied.

During the first 10 nights of the Games, men received more coverage than women by almost a 3 to 2 margin.

Over the next three nights, women’s coverage overtook the men’s, erasing a 15.6 percent gap with three nights of heavy women’s programming. The heavy tilt towards women athletes, combined with information provided by NBC, led the authors to predict women would receive more primetime coverage than men in PyeongChang.

Days 11-15, NBC’s focused more on women by a more than 4 to 1 margin. This dramatic shift resulted in women receiving 55.23% of the total coverage when mixed pairs are excluded through the first 15 nights. More men’s coverage on nights 16 and 17 moved the number closer to 50%, with women regaining some ground on the last night.

The distribution of American Olympic medals likely played a role in the coverage as women won the majority of Team USA medals (12 women, 11 men, 2 pair).

The final result is women receiving the 3rd highest proportion of primetime coverage in any Olympiad studied, including the 1994 and 1998 Games carried by CBS. 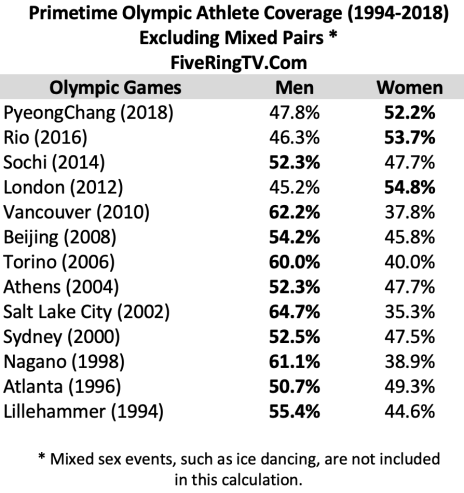 A complete table providing the exact amount of time NBC has devoted to each sport, with breakouts by athlete sex, during the its PyeongChang primetime Olympic broadcast is posted here.

Night by night breakouts are posted throughout FiveRingTV.com